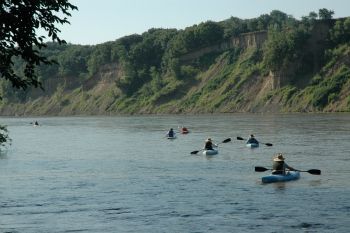 There is currently no LPRCA Kayak Tour planned for 2018.

The Lower Platte River Corridor Alliance hosts an annual Kayak Tour of a portion of the Lower Platte River. The LPRCA began hosting the tours in the summer of 2010 as a way to get people to discover both the beauty and dynamism of the river as well as to learn about the important work being done by the LPRCA, its members, and its partners to protect the critical natural, historical, and social resources of the Lower Platte River. The tours are held each summer and are free. Hope to see you paddling the Platte! The last scheduled LPRCA Kayak Tour was planned for 2016 but was unfortunately canceled due to weather.

The last LPRCA Kayak Tour was held on Tuesday, July 21, 2015.  We had perfect weather for paddling the Platte River from Schramm Park State Recreation Area to the Highway 50 Boat Ramp near Louisville. The 5.6 mile paddle took just over 2.5 hours and included a stop on a sandbar halfway through for a few presentations by the LPRCA and Mike Reed from the Lower Platte River Weed Management Area.  Our 37 participants learned a lot not only about kayaking, but about the Platte and some of the organizations that are a part of or partner with the LPRCA. Presentations at lunch included Lauren Dinan from the Nebraska Game and Parks Commission Non-game bird program, JoLeisa Cramer from the Nebraska Aquatic Invasive Species Program, Jacob Alishouse from the Nebraska Land Trust, Molly Nance from the Daugherty Water for Food Institute and Chris Madden from the University of Nebraska Omaha Upstream Weeds Program.  Thanks to FYRA Engineering for providing lunch and to all who helped make this another great day out on the Platte River!