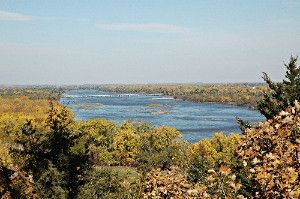 The LPRCA, with the natural and social characteristics of this unique and very important area in mind, conducts outreach, projects, and programs to further our mission.  One important outreach tool is the biennial Lower Platte River Summit.  The Summit is a key opportunity to bring diverse stakeholders and members of the public together to share ideas and learn about the critical resources and issues within this extremely important part of Nebraska. The goals of the Summit are to: 1) provide a venue for education and discussion of physical, social and economic issues and opportunities within the lower Platte and surrounding area; 2) provide exposure to the LPRCA and its diverse membership; 3) promote public and private opportunities for collaboration through “on the ground” experiences.

The 2017 Lower Platte River Summit will not be be held. The Alliance decided to hold a Planning Retreat on February 24, 2017 instead. A Summit is not planned for 2018.

The 2014 Lower Platte River Summit was held on November 6th, 2014 at Camp Carol Joy Holling's New Hotel Theodore Facility. Chuck Schroeder, Executive Director of the Rural Futures Institute, provided a keynote address about the resiliency of communities throughout the corridor and similiar regions in the Midwest.  Mr. Schroder's presentation was followed by a short break which led into a facilitated discussion panel centered around the main theme of the day, "Urban Growth - Rural Resiliency."  The discussion panel lead way to small group discussions focused on a newly developed discussion tool known as "Plainsopoly" which uses hypothetical situations on a diverse landscape to get participants to think about and discuss barriers and opportunities in land use issues in both rural and urban environments.

Lunch concluded our time at Camp Carol Joy Holling which was followed by an afternoon bus tour. Stops included the Kennedy farm near Louisville, a Plattsmouth history tour, and the Cass County Historical Society. We hope all in attendance found the 2014 Lower Platte River Summit to be enjoyable and informative. To all that contributed and participated, we thank you for making this year's Summit a successful and engaging experience.

"Visualizing Change and Sustainability of the Lower Platte River"

On October 18th the LPRCA hosted its biennial Summit focused on current programs, projects, initiatives and other efforts happening within the lower Platte River Corridor. The 2012 Summit was held at the newly renovated Fremont Opera House (541 North Broad St, Fremont, NE 68025) with a keynote presentation by renowned photographer Michael Forsberg. Attendees also heard from Chad Smith with Headwaters Corporation and Mark Pegg from UNL's School of Natural Resources. The day concluded with a tour of various sites throughout the Fremont, North Bend, and Schuyler areas.

The 2010 Lower Platte River Summit was held Thursday October 20th at the Riverview Lodge located in Mahoney State Park near Ashland. The theme for the 2010 event was "Preserving the Rural Environment: the Changing Landscape of the Lower Platte" which correlated perfectly to the keynote presentation. The keynote presenter was Bob Wagner, Senior Policy and Program Advisor for the American Farmland Trust (AFT). The topic of his address was "Protecting Farmland, Promoting Farming, Providing Options--Successful Programs and Activities from Around the Country." His keynote presentation was followed by a panel discussion with local residents and officials including Dave Sands (NE Land Trust), Rebecca Horner (Sarpy County Planner), Mary Hanson (National Park Service), & John Knapp (Sarpy County Landowner).

A bus tour of the project sites and resources of the Lower Platte River Corridor followed in the afternoon. The tour sites included Heldt Produce, MUD wellfields, Ron Patterson Farm and the Lied Pedestrian Bridge. Each site hosted a special presentation. Approximately 75 people attended the all-day event. The 2010 Summit was a great success and we want to thank members of the steering committee: Mary Hanson of the National Park Service, Matt Pillard of HDR Inc., Dave Sands of the Nebraska Land Trust, and W Don Nelson of Prairie Fire. We also want to thank our sponsors of this event: National Park Service, LPSNRD, LPNNRD and PMRNRD. Since the LPRCA Summit is held every other year, keep an eye out for the next Summit in fall 2012!