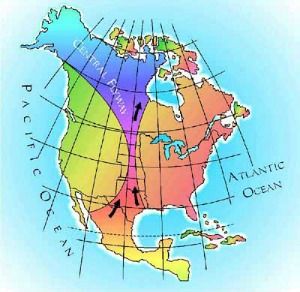 The Platte River is in the middle of the Central Flyway, a primary North-South corridor for migratory birds travelling between their Northern summer nesting grounds and their Southern wintering grounds during the change of seasons. The Central Flyway bird species include trumpeter swans, tundra swans, over one million Canadian geese, Greater White-fronted Geese, Sandhill Cranes, Canvasback ducks and others. Other species such as bald eagles, herons and several species of ducks migrate through the Platte River area but over shorter distances. The Whooping Crane, Piping Plover, and the Interior Least Tern are birds using the flyway which have been classified as endangered and are protected under the Platte River Endangered Species Partnership. The shifting sandbars that litter the Lower Platte provide nesting grounds for the Piping Plover and the Interior Least Tern.